Is Cauliflower the New Kale? And Other Trends from the Fancy Food Show

NEW YORK; JULY 12, 2019—It’s been a few years since I attended the Specialty Food Association’s Fancy Food Show. I’d forgotten how you have to pace yourself on sampling, and that this show is overwhelming in the best sense. Here’s the skinny…

Is cauliflower the new kale? Peekaboo has cauliflower “hidden” (their word) in its organic chocolate ice cream (other flavor combos: mint chocolate chunk-spinach, vanilla-zucchini, strawberry-carrot, cotton candy-beets); Nolita has tater-tot-y Cauli-Bites; and From the Ground Up offers cauliflower chips, pretzels, crackers and stalks.  Caulipower has been making cauliflower-crust pizzas for more than two years. How long ’til the kids catch on? And we are not alone on this: Fullgreen in the UK makes shelf stable Cauli Rice. 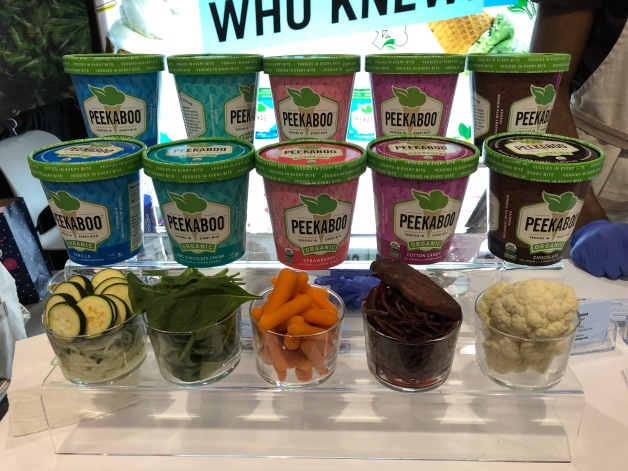 Coconut is still ascending. While many of these products have been available for a few years, there seemed to be a critical mass now: Cheeseland’s Kokos Coconut Cheese; Anita’s Coconut Yogurt; Coconut Collaborative yogurts and dessert pots (chocolate and salted caramel chocolate); W&M’s coconut chips in original, caramelized, and unsweetened, added to other varieties in its line; and more variations on coconut water than I could keep track of. 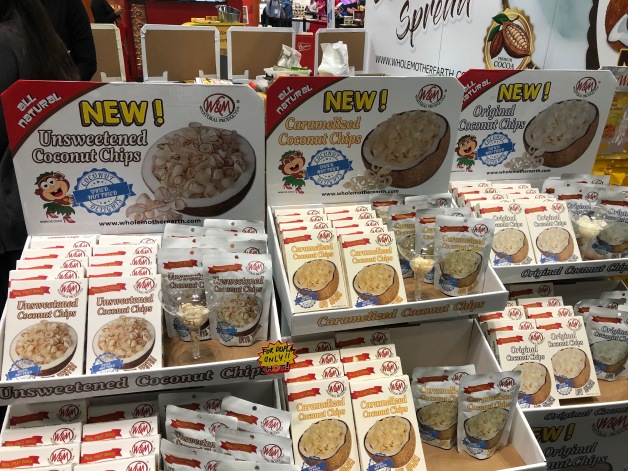 Is plant-based cheese cheese? Good Planet says its coconut oil-based food is dairy-free cheese. Tofu-based “cheese” products have also been around for a while. Yet because Velveeta is made of both whey and milk protein, Kraft has to label it “Pasteurized Prepared Cheese Product.” The USDA website says that cheese is a dairy product. And Wikipedia declares, “Cheese is a dairy product derived from milk that is produced in a wide range of flavors, textures, and forms by coagulation of the milk protein casein. It comprises proteins and fat from milk, usually the milk of cows, buffalo, goats, or sheep.” So why are these other options called “cheese”? Plant-based, generally, is on the upswing, at least in the number of offerings.

Sous vide, which seems played out in the consumer kitchen, is making a play for refrigerated and frozen food cases. Butcher’s has sous vide chicken vacuum packed for refrigeration; this was so new it’s not on the website yet, which is devoted to parent company Roli Roti’s Bay Area food truck business.

Long-time confectioner Maud Borup has added “drink bombs” — they work like colored, flavored Alka Seltzer — to its lineup. Given the popularity of bath bombs, can a version with a toy embedded be far behind?

Personal favorite licensed line: Flavors of Ernest Hemingway BBQ sauces, cocktail mixes, marinades, spices. Wife and husband team (many exhibitors are family and often multi-generation operations) that’s been a condiments licensee of the estate for about two years, with a major growth spurt over the last two months.

Coming on strong, so to speak: Coffees infused with alcohol, but with no alcohol content. Typically, as I understand it, the alcohol burns off in the roasting process, or the beans are finished in bourbon (or burgundy or other) barrels. World of Coffee has Jack Daniel’s Old No. 7 Brand licensed from Brown-Forman as well as Maison Camus (licensed French cognac brand). Burke Brands licenses Don Pablo. Other licensed brands include Kahlua, Oak & Bond, and Jim Beam. (At Licensing Expo a few weeks prior to the Fancy Food show, a Brazilian company was demonstrating a process for making alcohol-infused coffee pods.) 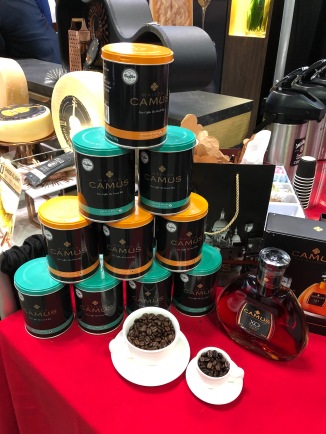 If you really want to talk “infusion,” though, think about the burgeoning CBD and hemp markets, not to mention cannabis. Sure, there were CBD- and hemp-infused products at the Fancy Food Show. But when CBD hits its stride — and there are many reasons that could be a while — the Javits Center won’t be anywhere near large enough to host the SFA’s Fancy Food Show any more. (For more on CBD- and beer-infused products at the Fancy Food Show, see Licensing International’s Inside Licensing.)

Quote of the show: “Put a unicorn on anything and it will sell,” says Maud Borup’s Vanna Olson. Indeed, Peekaboo is promising a unicorn flavor ice cream, though the “infused” veggie hasn’t been announced yet.