Who Gets The Biggest Bump In Sales Of Licensed Merchandise From A World Series Win?

NEW YORK; October 22, 2015—Macy’s is on top of its game: The flagship Herald Square store rolled out (literally, on racks) a NY Mets display at the 7th Ave./34th Street entrance today. With Majestic, Nike, and Forever Collectibles t-shirts, sweatshirts, jerseys, and tote bags, it was a small array but prominent for sure. “This is all you have?” asked a woman who promptly went through the rack looking for the size she wanted.

Mets merchandise following its Pennant win at the entrance to the flagship Macy’s in Herald Square.

What does a Mets-Kansas City Royals or Toronto Blue Jays World Series matchup look like from a licensing perspective?

This should be a good year. What licensees don’t want is the same team winning two years in a row, or even two out of three years. As with a series of movies, fans buy their World Series memorabilia in year one; the second film in a series typically doesn’t do as well as the first. That follows for sports teams.

The Mets make it to the series on average every 15 years — 1969, 1986, 2000, 2015. Kansas City competed in the World Series last year, losing to the Giants, and hasn’t won a series since 1985. Toronto won back-to-back in 1992 and 1993 but haven’t been back since. So licensees are good on that count whoever wins. Plus, much of the merchandise during a Series is souvenir goods purchased at the venue and in local stores.

But which team in the 2015 World Series stands to see the biggest bump in merchandise sales? The Mets have a larger home market, though it’s hard to know if there are as many out-of-market fans as there are for the Yankees and the Red Sox. Still, that sizable home market means more customers for merchandise. 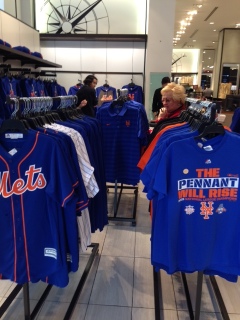 Most telling is that there are three Mets on Major League Baseball’s list of 20 most popular jerseys of the 2015 regular season: Matt Harvey (No. 9), David Wright (No. 11), and Jacob deGrom (No. 17). For the post-season, all three will clearly gain traction, with Harvey a good bet for topping the list if the Mets take the series. Maybe even if they don’t. Toronto’s Josh Donaldson is on the list at No. 12, but there are no Royals on the MLB best-seller list at all!

The irony: No. 1 on the regular season list is Kris Bryant of the Chicago Cubs. The Mets, of course, swept the Pennant series…from the Cubs.

Sidenote: The first jersey you see in the Macy’s Locker Room by Lids shop on the fourth floor is a woman’s Derek Jeter “team captain” model from Majestic. There’s very little Mets merchandise up there — it probably got moved to that high-profile location on the main floor, prompting one customer to be sent downstairs to find what he wanted.