Iconix Battles Its Own Star Wars In More Ways Than One++

NEW YORK—November 6, 2015: Iconix is re-stating its financials for 2013, 2014 and 2015 with a net impact of about $3 million. Ultimately not a huge amount for a public company, but enough to send the stock plummeting 58% today as of 1 p.m. Results for the quarter and year-to-date will be released Monday, but essentially the bad news is out. And it’s no surprise. (See

my previous post on Iconix last August for more on the company.) The company also noted that an SEC inquiry into its 2014 financials continues.

Meanwhile, no one has been announced as a permanent replacement for founder/ex-CEO Neil Cole, and although the Peanuts movie opening today, which the company has been betting on to turn its fortunes around, is getting good reviews, they’re not money reviews. “Pleasant” isn’t the sort of adjective that brings out the masses (kind of the equivalent of “she/he has a great personality”), and Iconix is revising downward its forecast of licensing revenues for the year yet again because of Peanuts, because too many of its fashion brands aren’t cutting it at retail, and because of soft performance in key European and Chinese markets.

You’d think Star Wars was the movie opening today, but that’s got more than a month to go. Iconix is surprised that Star Wars is getting the amount of shelf space it is already. Hard to know what galaxy they’ve been hiding under. In a Barnes & Noble in Brooklyn Heights, NY, there are 17 linear feet of tables alongside the escalator that are pure Star Wars, with another 3-4 places around the store offering still more. At Costco two properties dominate the toy aisles: Star Wars and Frozen, the latter the property Disney credits for its strong consumer products performance year-to-date. 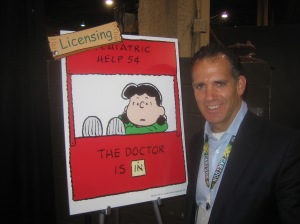 Lucy with licensing agent Stu Seltzer of Seltzer Licensing in the mid-2000s.

About 10 years ago, when Peanuts was still licensed by United Media and I owned and published The Licensing Letter, I was granted permission to use a classic panel of Lucy in a lemonade stand to adorn our booth at Licensing Expo. We had invited various licensing consultants to be “Licensing Doctors,” advising newcomers on licensing strategy. We couldn’t change the wording on the actual panel, but we were permitted to attach a little piece of “fence” to get our message across. Feels as though there’s some irony in there somewhere.

Wonderful to wake up to a front page NY Times story about the success of University of Alabama licensing, the first two words of which are “Bill Battle.” Battle, now 73 and truly one of the stars of the modern era of consumer products licensing, played for Alabama in his day. In 1970, at 28, he coached the competition at Tennessee. He founded Collegiate Licensing Company (CLC) in 1981, building the company to handling licensing for about 200 of the leading colleges, universities and conferences before selling to IMG in 2007 for a reported $100 million (IMG is now part of WME). Since 2013 Battle heads the Alabama athletics department. Great to see him get this kind of national recognition. The article, incidentally, notes that CLC guaranteed Alabama $9 million in royalty revenue from sales of licensed merchandise for this year (translate that to about $200 million at retail), and $103 million through the 2024-2025 season (in excess of $2 billion at retail over the next decade).

Activision Blizzard, which is acquiring Candy Crush developer King Digital, is forming a studio to develop movies and TV shows based on the properties it owns, including Candy Crush, Call of Duty, and Skylanders. Unit is headed by Nick van Dyk ex-SVP corporate strategy for . . . Disney.

China’s State Administration for Industry and Commerce is endeavoring to stamp out counterfeiting of Disney merchandise. Unusual for a crackdown like this to focus on a particular company’s IP, but (a) Disney is such a huge chunk of the market and (b) the company is building a theme park in Shanghai. Seems like all roads, no matter where, lead to the House of Mouse.